The Women’s march in D.C. and Chicago got most of the press, but Los Angeles, hundreds of other cities, and even Antarctica were involved.

Lets take a look at various protests, then I offer comments on “How Feminists Miss the Boat”.

The Intercept reports “Welcome to Your First Day. We Won’t Go Away” — Scenes From the Women’s March in D.C.

The Intercept’s Jeremy Scahill describes the extraordinary scene from the middle of the Women’s March on Washington. “This is a good indication of the kind of resistance that we’re going to see going forward,” he says.

I am a huge Intercept fan, but that strikes me as nonsense. He does not know, and neither does anyone else how much resistance we will see.

Furthermore, I have to ask “resistance to what?” Trump? Bigotry? Something else?

Nonetheless, it was a huge success, for at least a couple days. There were over 700 sister marches in other cities in the U.S. and around the world.

Hundreds of thousands of women gathered in Washington on Saturday in a kind of counterinauguration after President Trump took office on Friday. They were joined by crowds in cities across the country: In Chicago, the size of a rally so quickly outgrew early estimates that the march that was to follow was canceled for safety. In Manhattan, Fifth Avenue became a river of pink hats, while in downtown Los Angeles, even before the gathering crowd stretched itself out to march, it was more than a quarter mile deep on several streets.

Begun as a Facebook post just after the election, the march is the start of what organizers hope could be a sustained campaign of protest in a polarized America, unifying demonstrators around issues like reproductive rights, immigration and civil rights. The movement has also encountered divisions.

The Times had journalists covering the marches in Washington; New York; Boston; Atlanta; Denver; Los Angeles; Phoenix; St. Paul, Minn.; and Key West, Fla. Check out what they posted on Twitter and what readers asked of them live. See photos from marches around the world, too.

I have a question, “Who the hell is she (or anyone else) to say who is and who isn’t America?”

Forgive me for pointing out the blatant sexist nature of those signs. 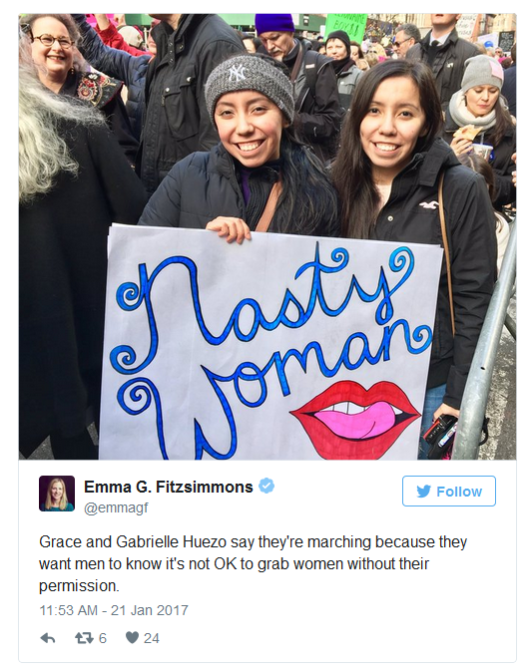 Forgive me for asking another question: Does that poster remotely convey the message “Don’t Grab”?

Elsewhere Around the World

There were marches across Europe, in cities including Berlin, Paris, Rome, Vienna, Geneva and Amsterdam. Around 2,000 marched in Vienna, Austria, but the crowds quickly thinned due to sub-zero temperatures, Reuters reports.

Baffled? Consider this chain of tweets.

Here is the Twitter Chain if you care to chime in.

For starters, I am a strong supporter of Planned Parenthood and have been for years. I donate money to the cause every year.

And lest anyone get the wrong idea, I am not a huge Trump fan. I voted for him despite his obvious sexism.

Why? Because I am extremely anti-war, and Hillary along with Senator John McCain, never met a war they did not like.

Hillary supported the war in Iraq and US drone policy. The neocons were all comfortable with Hillary. They openly said so.

Hillary was the architect of a disastrous campaign in Libya bragging in regards to Muammar Gaddafi “we came, we saw, he died”.

Now the country is in a state of civil war. Hillary wanted a no-fly zone over Syria rising confrontation with Russia. How nuts is that?

People claim, likely accurately, “we don’t know what Trump will do”. I agree. But we likely do know what Hillary would have done: lead the country into more wars.

All the people who don’t understand how women could possibly vote for Trump, need to reflect on the brutal, anti-male, anti-female warmongering candidate that Hillary was.