Eurozone Target2 imbalances have touched or exceeded the crisis levels hit in 2012 when Greece was on the verge of leaving the Eurozone. Others have noted the growing imbalances as well.

I had a couple of questions for the ECB regarding Target2, which they have answered, I believe disingenuously.

First, we will explain Target2, then we will take a look at various charts, viewpoints, and the email exchange with the ECB.

Target2 stands for Trans-European Automated Real-time Gross Settlement System. It is a reflection of capital flight from the “Club-Med” countries in Southern Europe (Greece, Spain, and Italy) to banks in Northern Europe.

Pater Tenebrarum at the Acting Man blog provides this easy to understand example: “Spain imports German goods, but no Spanish goods or capital have been acquired by any private party in Germany in return. The only thing that has been ‘acquired’ is an IOU issued by the Spanish commercial bank to the Bank of Spain in return for funding the payment.”

This is not the same as an auto loan from a dealer or a bank. In the case of Target2, central banks are guaranteeing the IOU.

Target2 also encompasses people yanking deposits from a bank in their country and parking them in a bank in another country. Greece is a nice example, and the result was capital controls.

If Italy or Greece (any country) were to leave the Eurozone and default on the target2 balance, the rest of the countries would have to make up the default according to their percentage weight in the Eurozone. 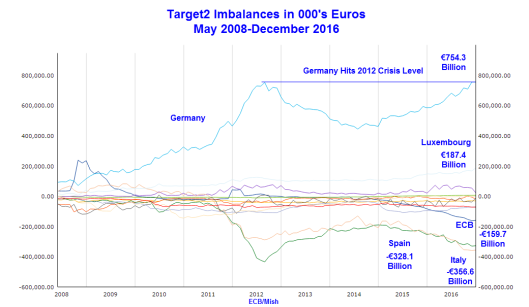 As of December 2016, if Italy were to exit the Eurozone, Italy would owe €356.6 billion to Germany, Luxembourg, and a couple other small creditors.

What’s the likelihood Italy could ever pay back €356.6 billion?

Vast liabilities are being switched quietly from private banks and investment funds onto the shoulders of taxpayers across southern Europe. It is a variant of the tragic episode in Greece, but this time on a far larger scale, and with systemic global implications.

There has been no democratic decision by any parliament to take on these fiscal debts, rapidly approaching €1 trillion. They are the unintended side-effect of quantitative easing by the European Central Bank, which has degenerated into a conduit for capital flight from the Club Med bloc to Germany, Luxembourg, and The Netherlands.

This ‘socialization of risk’ is happening by stealth, a mechanical effect of the ECB’s Target2 payments system. If a political upset in France or Italy triggers an existential euro crisis over coming months, citizens from both the eurozone’s debtor and creditor countries will discover to their horror what has been done to them.

As always, the debt markets are the barometer of stress. Yields on two-year German debt fell to an all-time low of minus 0.92pc on Wednesday, a sign that something very strange is happening. “Alarm bells are starting to ring again. Our flow data is picking up serious capital flight into German safe-haven assets. It feels like the build-up to the eurozone crisis in 2011,” said Simon Derrick from BNY Mellon. 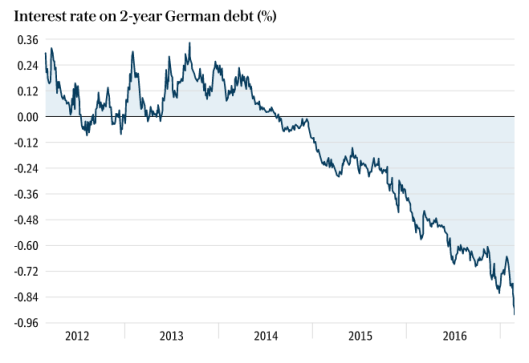 The Target2 system is designed to adjust accounts automatically between the branches of the ECB’s family of central banks, self-correcting with each ebb and flow. In reality, it has become a cloak for chronic one-way capital outflows.

Private investors sell their holdings of Italian or Portuguese sovereign debt to the ECB at a profit, and rotate the proceeds into mutual funds Germany or Luxembourg. “What it basically shows is that monetary union is slowly disintegrating despite the best efforts of Mario Draghi,” said a former ECB governor.

The Banca d’Italia alone now owes a record €364bn to the ECB – 22pc of GDP – and the figure keeps rising.

Spain’s Target2 liabilities are €328bn, almost 30pc of GDP.  Portugal and Greece are both at €72bn. All are either insolvent or dangerously close if these debts are crystallized.

On the other side of the ledger, the German Bundesbank has built up Target2 credits of €796bn. Luxembourg has credits of €187bn, reflecting its role as a financial hub. This is roughly 350pc of the tiny Duchy’s GDP, and fourteen times the annual budget.

Many media reports suggest the growing target2 imbalance in Italy is a sign of capital flight. ECB president Mario Draghi said it was a function of ECB asset purchases. Can you explain why Draghi is right or wrong?

Please also explain the growing target2 imbalance at the ECB itself.

Thank you for your email and please accept our apologies for the late reply.

The implementation of the APP affects TARGET balances through cross-border settlement of our purchases. For more information on this particular mechanism, please see ECB Economic Bulletin, Issue 7 / 2016 – Box 2: TARGET balances and the asset purchase programme (pages 21-24).

As regards the ECB’s own Target balance, when the ECB purchases securities under the APP, the ECB credits the account of the respective counterparty. Such counterparties are credit institutions, which cannot hold accounts with the ECB, but instead, hold accounts with national central banks. Therefore, payment for a security by the ECB automatically increases the ECB’s TARGET liability (but not necessarily the overall TARGET balance). This is discussed in the Bundesbank’s March 2016 Monthly Report (pages 53-55).

I have been talking about Target2 imbalances for years, and I do not accept ECB’s response straight up.

Euro intelligence also discussed this very question recently. They have it correct, as follows, emphasis mine:

One of the barometers of tension in the Eurozone is the number of articles in the German press questioning the euro’s advantages to the country. The publication of the latest Target2 imbalances is not helping soothe nerves. As of end January, the German surplus was at an all-time record of €796 billion, while Italy’s deficit was at a record €364 billion. The ECB argues that the reason for the gap is not the same as it was during the Eurozone crisis when the imbalances reflected capital flight.

Philip Plickert writes in FAZ that this argument does not tell the full story. It is true, of course, that international banks based in London sell bonds to the Bank of Italy from their Frankfurt-based branches – so that the asset purchases result in transfers of central bank money from Italy to Germany. But why do the sellers not replenish their portfolios with purchases of Italian bonds, shares or other assets? Instead, they take the money and invest in Germany. So this is still capital flight – except that it works indirectly through the asset purchase programme.

Do that long enough and this is what happens:

Pater Tenebrarum at the Acting Man blog commented via Email “I agree with the eurointelligence view that the steep Italian and Spanish deficits are still a testament to capital shunning various countries. To put it very simply: people managing large sums of Other People’s Money for institutions subject to fiduciary duty continue to have doubts about the euro’s survival, and rightly so.

Reader Lars replied: “It seems to me that the ECB is trying to complicate matters and kick the ball into the tall grass. In regards to the ECBs €160 billion Target2 deficit, it might be the case that the ECB has borrowed from Bundesbank and then lent the money to other national central banks (NCBs) because the Bundesbank has not been willing to do all the heavy lifting itself. Is the Bundesbank shunning risk at local NCBs?”

Rating Agencies Where Art Thou?

The rating agencies should be all over this issue but they are not. Here are two possible explanations.

Target 2 is one of the least discussed and least understood problems in the Eurozone.

Jens Weidmann, Bundesbank president, allowed nearly €800 billion in credit to build on his watch. One has to wonder: Is Weidmann moving into illegal territory?

Egon von Greyerz, Founder & Managing Partner, Matterhorn Asset Management AG, made a comment similar to what I have stated many times: “Germany is in bigger trouble than Italy, Spain, or Portugal. Those countries can’t pay so Germany will have to foot the bill.”

Alternatively, the Bundesbank and the ECB are going to print money to cover those losses!

Greece alone is unlikely to trigger a crisis now, but Italy, Spain, or France could.

Recent strength in gold is likely based on increasing doubts central banks are once again out of control.

Of course, central banks were never really in control, but appearances matter.

56 thoughts on “Fuse is Lit! Target2 Imbalances Hit Crisis Levels: An Email Exchange With the ECB Over Target2”