Curve Watchers Anonymous is taking a hard look at the yield curve in light of the now odds-on market view of a March rate hike.

Before looking at the chart below, where do you think rates are relative to January 2014? Up, down, or sideways? 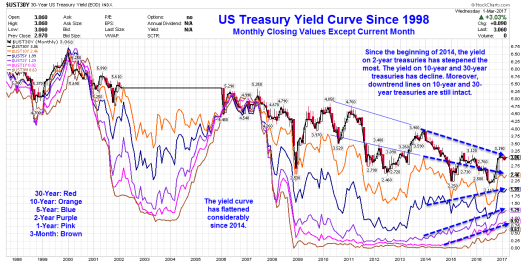 The chart shows monthly closing values except for the current month.

The 2-30 spread flattened by a whopping 181 basis points in just over two years.

A flattening of the yield curve is not good for bank profits. Rising 10-year yields since mid-2016 are not good for mortgages or housing affordability.

Not to worry, despite poor economic reports, Fed governors have stated: “This is a surprisingly strong economy.”

Somewhere in that set of links, there is hidden “surprising strength”. I leave it to the reader to find the surprises and report back.