Cardiff Metropolitan University is at the forefront of political correctness sensitivity. The University Bans Lecturers from Using any Sexist or Insensitive Words. The list of banned words is wider than you might think. Here are some examples: mankind, homosexual, housewife, manmade, and sportsmanship. 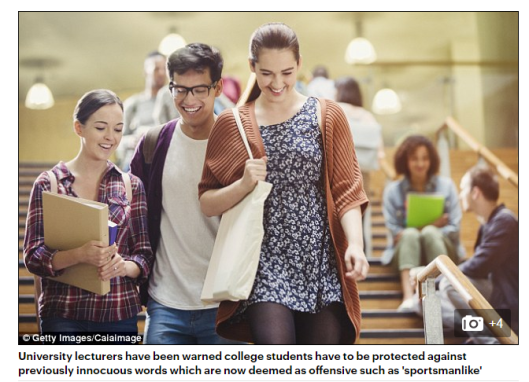 And please, try to avoid words like “mother” and “father” unless you can say “mother and father” together. Yes, the article states that.

Gee, is there an order for this? Yes, there is. It better be random. Always saying mother first could get you in trouble. The article did not say but the phrase “ladies and gentlemen” clearly has to go.

According to the guide, Mrs. and Miss are considered offensive. Clearly, it’s best to avoid gender-identifying terms altogether.

What happens When these culturally-trained “snowflakes” hit the real world outside of their safe-space university?

Hmm. Am I allowed to use the word “snowflake” like that? Apologies offered for my unsportspersonslike conduct.