Industrial production was unchanged in February following a 0.1 percent decrease in January. In February, manufacturing output moved up 0.5 percent for its sixth consecutive monthly increase. Mining output jumped 2.7 percent, but the index for utilities fell 5.7 percent, as continued unseasonably warm weather further reduced demand for heating. At 104.7 percent of its 2012 average, total industrial production in February was 0.3 percent above its level of a year earlier. Capacity utilization for the industrial sector declined 0.1 percentage point in February to 75.4 percent, a rate that is 4.5 percentage points below its long-run (1972–2016) average.

Most of the major non-energy market groups recorded increases in February. For a second consecutive month, however, a drop in the output of utilities contributed substantially to losses in the overall indexes for consumer goods, business supplies, and materials through their energy components. The production of consumer goods moved down 0.4 percent overall, reflecting a drop in consumer energy products. The index for consumer durables was unchanged, as a loss of 3.6 percent in appliances, furniture, and carpeting was outweighed by increases in other groups. The production of consumer non-energy nondurables rose 0.3 percent because of improvements in foods and tobacco and in clothing. The output of business equipment moved up 0.7 percent, with both information processing equipment and industrial and other equipment recording increases. The output of construction supplies jumped 1.3 percent; the index has advanced more than 4 percent over the past six months. The indexes for non-energy business supplies and non-energy materials each rose more than 1/2 percent. Within materials, both durable and nondurable materials posted gains.

Manufacturing output rose 0.5 percent in February for a second consecutive month. Led by advances of more than 1 percent for nonmetallic mineral products, fabricated metal products, and machinery, the production of durables increased 0.6 percent. The electrical equipment, appliance, and component industry and the furniture and related products industry registered the only substantial losses within durables, about 1.5 percent each. The index for nondurables rose 0.4 percent; gains of more than 1 percent were recorded by paper and by plastics and rubber products, while the only losses were posted by textile and product mills and by chemicals. The output of other manufacturing (publishing and logging) fell 0.5 percent.

The output of mining jumped 2.7 percent in February, with widespread gains among its components, after moving up 2.2 percent in January. The mining index in February was 1.8 percent higher than its year-earlier level. 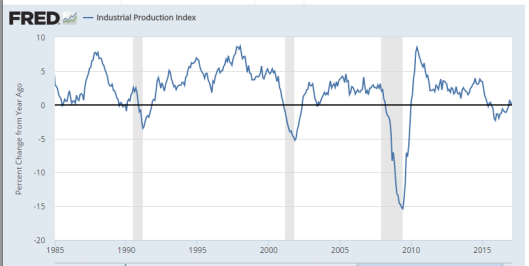 These charts give credence to the theory that the regional Fed manufacturing reports are indeed picking up. However, the pace is much slower than the huge jumps in the regional reports would seem to suggest. 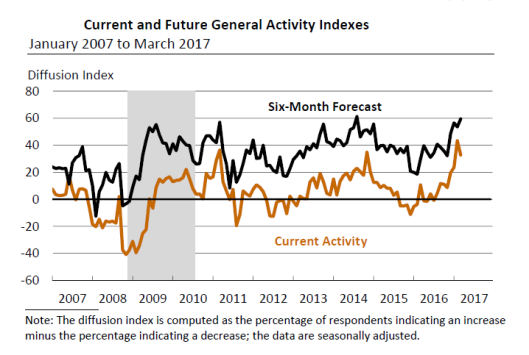 According to the Philly Fed diffusion index, manufacturing has been getting stronger since mid-2016.

This month, the manufacturing activity index registered +32.8. Las month the index was 43.3, the best showing in over 10 years.

That’s just one regional report, but most of them have been strengthening for some time.

The industrial production numbers are just now starting to pick this up, and the year-over-year numbers are still very weak against what should be very easy comparisons.

In regards to point number three, diffusion indexes can be a strange animal. New orders picking up by 1% at two small firms but down 15% at a larger firm is a net +1 to the index.

Diffusion indexes just measure direction, not strength of the move.

If manufacturing conditions are generally improving, yet barely improving, we would see reports like the Philly Fed and Empire State survey above, with actual factory data not matching.

Today, the manufacturing components jumped in a bit of a catch-up move that still lags.

Finally, Industrial production has been weak since  June of 2015, and is still weak today. The weather has not been that cool in summer (slowing electricity) and that warm in winter (slowing need for heat), for that period of time.