With autos and general consumer spending rolling over, the two things propping up the economy are housing and durable goods orders, more specifically airplane orders. What’s up with that? 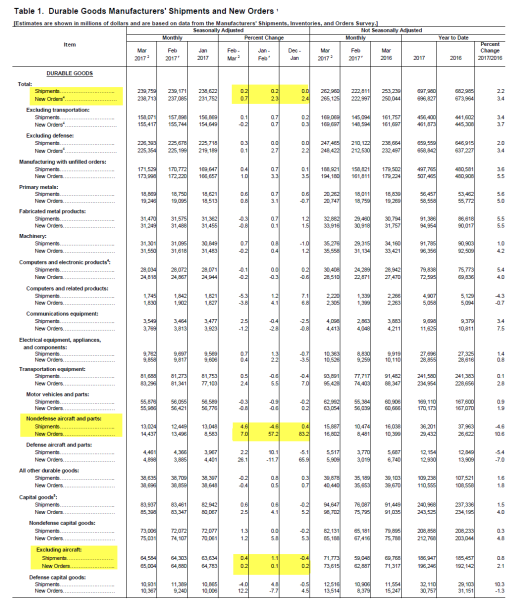 Despite sentiment numbers that are through the roof, businesses are not putting their money where their sentiment is. I asked a friend connected to the industry his take. I also asked about order cancellations. Here is his reply.

This is drip by drip.

Part of your answer is found in this article: American Airlines Delays Boeing, Airbus Jet Deliveries.

These orders were placed years ago. Some are deferred, some canceled. Boeing does not disclose the cost to cancel, but there is some. Typically there is a % down payment with additional payments as the airplane assembly progresses. Boeing usually, in a normal market, is able to place these canceled/deferred airplanes with other customers.

Boeing is very good with its customers and accommodates to the extent possible. But, wide-body airplane demand is collapsing. Emirates just pulled 12 flights per day as US-Mideast travel is in decline due to Trump’s actions.

2018 and 2019 look grim for Boeing. Expenses are high and they are laying off to stay ahead of the curve.

The above analysis has not translated into economic reality yet. Perhaps it won’t. But credit card defaults have soared, autos are heading South, consumer spending is weak, wages have not kept up with inflation, and regional bank lending has collapsed.

Meanwhile,  please don’t worry because the Bottom 50% of Americans No Longer Matter.

30 thoughts on “Spotlight on Airplane Orders: Demand About to Collapse?”