As of last Friday, the Atlanta Fed GDFPNow model for the second-quarter GDP stood at 3.4%. In contrast, the FRBNY Nowcast report was 2.2%.

This is yet another large gap, albeit smaller than the ones we saw for the first quarter. What’s more interesting is some of the recent gyrations.

What’s more interesting is that in some of the recent gyrations, on the same data, the models went opposite directions. 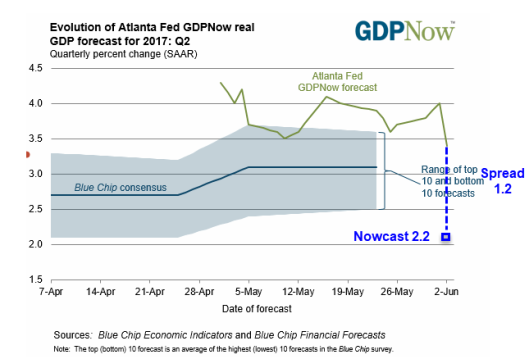 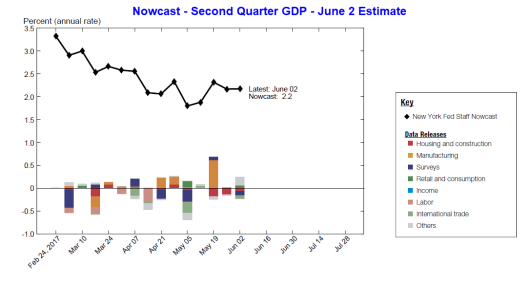 The spread has narrowed quite a bit. But what caught my eyes is the way it happened. 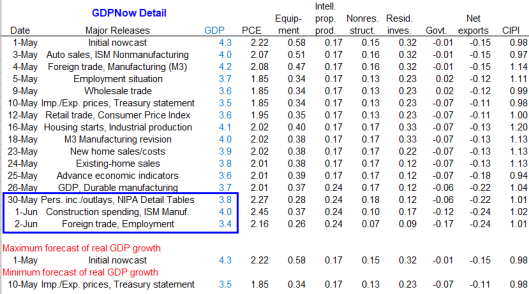 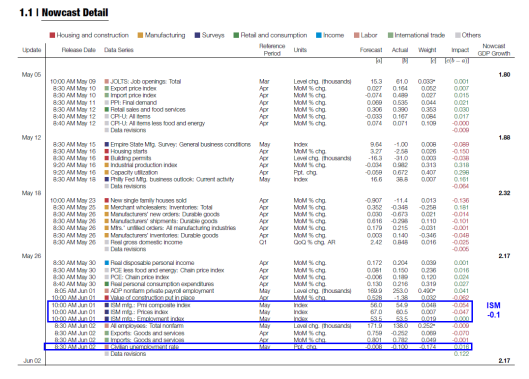 I captured the report on June 2, labeling it GDPNow Silliness.

I do not have the precise breakdown other than construction subtracted but ISM more than made up for it to the tune of +0.2 percentage points to GDPNow.

On the same ISM Data, Nowcast concluded GDP would drop by 0.1 percentage points.

The models do not agree on the direction, on the same data. Employment data was similar.

Nowcast did nothing on the employment data (jobs) and subtracted less than 0.1 percentage points for foreign trade data.

Nowcast did add a tiny bit for the civilian employment rate. The net effect is GDPNOw subtracted substantially for employment but Nowcast nudged slightly higher.

It is absurd to believe such reports, if accurate, will add to GDP.

A key problem in all of this is simple. Models do not think. Historically, falling unemployment is a good thing so that is what the model sees. Instead of looking at unemployment, I suggest the models look at employment.

Historically, rising ISM data is a good thing, so that is what the model sees. It matters not one iota to the model that the Fed regional reports and the ISM diffusion indexes have been wrong for a long time.

And as I have pointed out, ISM and Markit’s PMI do not agree despite the fact they supposedly measure the same thing. For discussion, please see Markit PMI and ISM Diffusion Indexes Upbeat on Jobs.

It’s plug and play, baby, with each model having its own biases and inaccuracies, often in opposite directions.

When the bias is additive, as it was last month, we see amazingly wide gaps in GDP forecasts.

My point is not to overly criticize the models. I have learned a lot from them. I hope my analysis goes into further refining the models to make them better.

I repeat once again, that Pat Higgins, creator of GDPnow, is very generous with his time in answering questions about his model. Both models represent a starting point for further analysis.

Meanwhile, please think, because the models don’t, by design.