Actual industrial output has been far weaker than the regional Fed manufacturing reports and the ISM report for at least a year.

Yesterday we heard from the Empire State region. Today the spotlight is on the Philadelphia Fed Business Outlook Survey where new orders plunged.

Econoday notes “cracks” in the survey.

There finally may be cracks appearing in Philly Fed which has, since the election, been signaling break-out strength for the Mid-Atlantic manufacturing sector. The general conditions index looks solid at 19.5, still very strong though down from 27.6 in June and the least robust result since November. But details — which in this report are not reflected in the headline index — are the flattest since late last year.

New orders, at only 2.1, are down more than 20 points in the month for the worst reading since August last year. Unfilled orders show better strength at 7.2 but are still the weakest since December. Employment, at 10.9, is also the softest since December as are selling prices, at 9.0. Shipments, still strong at 12.2, are at the lowest rate of month-to-month growth since September last year with the workweek, still positive at 3.8, the lowest since November.

This report has been a puzzle all along, signaling post-election strength that was not matched at all by the national factory sector where growth has been no better than moderate. Though indications in today’s data still point to growth, they definitely are pointing to slowing which could either signal that this report is falling into line with actual national growth or, possibly, that national growth may be pivoting lower. In any case, this report is based on a small volunteer sample from only one area of the country. 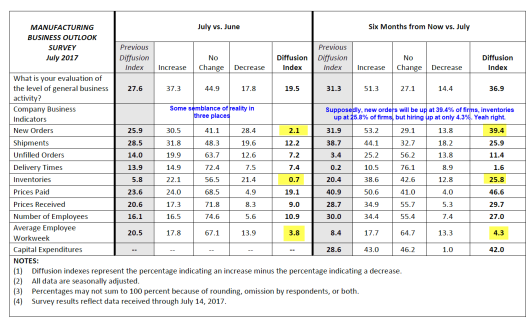 New orders, inventories, and the average workweek are all showing relative weakness. But check out the six-month look ahead component.

Only 4.3% of firms expect more hiring while 39.4% expect more new orders and 25.8% expect to build inventories. 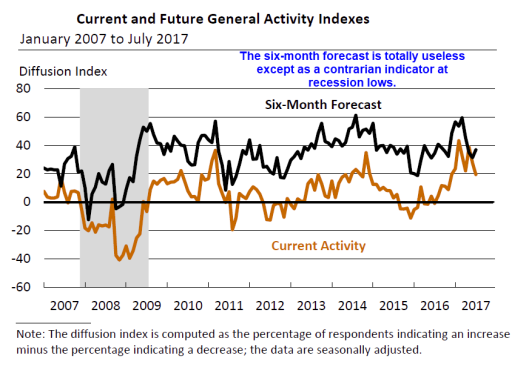 The look-ahead expectation is always a joke. It’s only real use is as a contrarian indicator. During recessions it turns negative, marking the bottom.

Ahead of this report, Econoday was actually worried about overheating. Given these reports had nothing to do with actual output, the concern was more than a bit silly.

For a discussion of the weaknesses in diffusion indices and the recent Empire State report, please see Empire State Manufacturing: Another Strong Regional Report Bearing Little Resemblance to Reality.