The Federal Reserve Bank of New York released its Nowcast forecast today. The Atlanta Fed GDPNow forecast was updated on July 14 and again on July 19.

The GDPNow forecast is up from July 14, but way lower from the preceding cast. Meanwhile, the Nowcast inched back above the two percent mark for the first time since June 9.

The overall tendency at this point is convergence at or slightly above two percent.

“The GDPNow model forecast for real GDP growth (seasonally adjusted annual rate) in the second quarter of 2017 is 2.5 percent on July 19, up from 2.4 percent on July 14. The forecast of second-quarter real residential investment growth increased from -1.6 percent to -0.6 percent after this morning’s new residential construction report from the U.S. Census Bureau.” 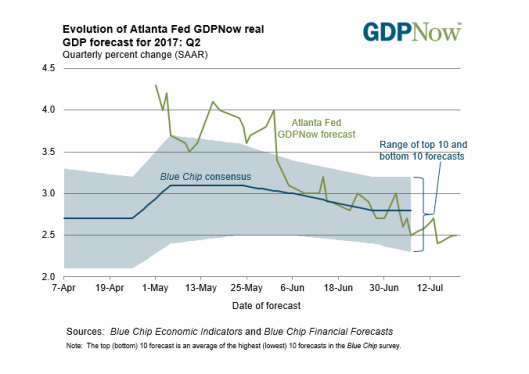 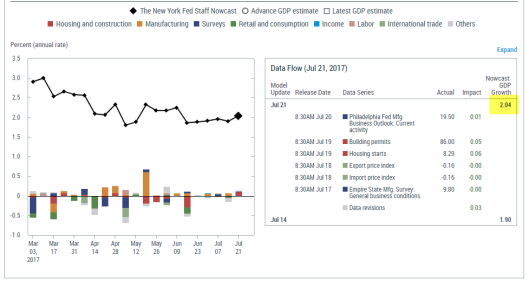 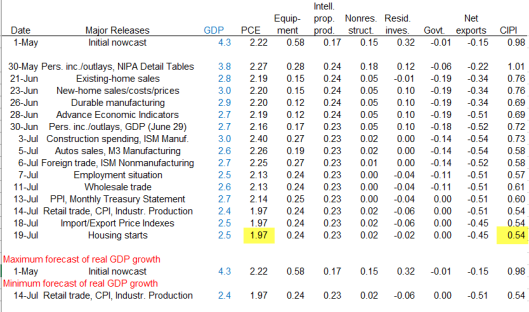 I have been in contact with Pat Higgins, the creator of GDPNow several times in the past week over various issues.

At the top of the heap is the GDPNow forecast for nearly a two percent contribution from Personal Consumption Expenditures (PCE) despite the fact that retail sales are down and things like food stamps will not change much.

As has always been the case, Pat was generous with his time in explaining the model.

Most of the numbers in his contribution forecast seem to make sense. The two wildcards on my mind are CIPI and PCE.

CIPI is “change in private inventories.” I seriously question the value of inventory on auto dealers’ (new and used) lots. In addition, inflation is headed lower overall, if one accepts numbers from the BLS.

Perhaps my simple model is too simple. I am going to play around a bit with PCE to see what I can come up with.

At the beginning of the quarter, I was sure the initial GDPNow forecast was wildly off base. Something on the order of two percent is at least in the ball park.

The more I study this, the more everything seems like one big crap shoot, especially with massive revisions from the BEA and commerce department out of the blue on top of questionable deflators of PCE inflation that seldom match CPI inflation.