A major debate topic came up between Max Keiser and Peter Schiff at the Freedom Fest conference on July 19-22 in Las Vegas.: Bitcoin vs Gold.

Max Keiser is a huge proponent of Bitcoin. Peter Schiff says “These digital currencies might make fiat currencies look good. That’s how bad they are.” 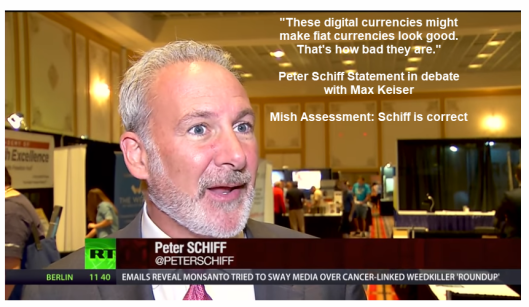 The video was well produced, thanks to Stacy Hebert. It’s well worth a play in entirety.

As noted in my clip, I think Schiff is on the right side of the debate. This is my take:

“The disparity between virtually no merchant acceptance and Bitcoin’s rapid appreciation is striking,” the analysts wrote.

In contrast, Bitgold is accepted at any place that accepts a debit card.

Please note the Average Bitcoin transaction fee is now above five dollars. 80% of the world population lives on less than $10 a day. So much for “banking the unbanked.”

Cramer’s rationale was rather amusing.

“European banks are frantically trying to buy them so they can pay off ransomware. It’s a short-term way to be able to deal with cybersecurity. It is the way to pay off the bad guys,” Cramer said on “Squawk on the Street.”

“When you get hit and you’re not sure how to do bitcoin, these cyberattackers have customer service desks,” Cramer said.

The idea that banks need to “try” to buy Bitcoins is absurd. 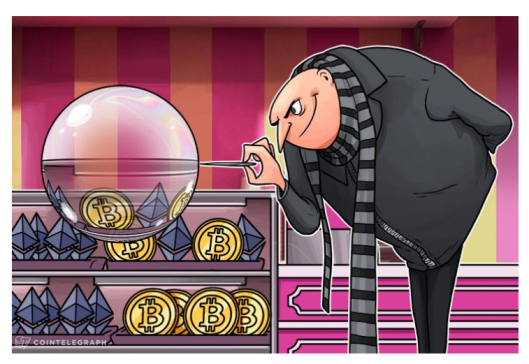 Also in regard to point number 6, we are now told Bitcoin & Ethereum Can Never Be In A Bubble (No, really: digital bubbles are impossible)

The author’s rationale is based on his own observations of a theory proposed by George Soros.

This reminds me of the dot-com “Gorilla Game” theory that stated “gorillas” like Cisco (CSCO) could never be overpriced. No price was too high for a “gorilla”.

It also reminds me of absurd click rate measures used to justify stocks whose value eventually went to zero.

Schiff went a bit off track at times in the debate, primarily in regards to US dollar bashing.

The Eurozone banking system is insolvent. Both the Euro and the Yen are worse currencies than the dollar. Schiff has to know that, but he just cannot stop dollar bashing.

While it’s possible the dollar breaks the previous low, at least Schiff was not preaching hyperinflation.

That said, I believe Shiff has the dollar direction right for now. I don’t hold grudges or let past differences sway my current take.

This puts me in agreement or at least near agreement with the key points made by Schiff in his interview with Max Keiser.

Both Schiff and I have an economic interest in Bitgold. I expect his interest is many times the magnitude of my ongoing advertising relationship.

78 thoughts on “Bitcoin vs Gold: Peter Schiff vs Max Keiser – Who is Right? Bitcoins the New Beaver Pelts?”