The hype and nonsense Bitcoin and gold has blasted through the troposphere into the stratosphere. I suppose hype could get higher. The next target is the mesosphere.

Some of those residing on terra firma are tired of the hype. I am one of those.

Let’s kick off the discussion of gold hype although Bitcoin is far worse.

James Rickards says Inflation Could Be Caused in 15 Minutes.

The Fed can cause massive inflation in 15 minutes. They can call a board meeting, vote on a new policy, walk outside and announce to the world that effective immediately, the price of gold is $5,000 per ounce.

They will print money when they buy and reduce the money supply when they sell via the banks. This is exactly what the Fed does today in the bond market when they pursue QE. The Fed would simply substitute gold for bonds in their dealings. The Fed would target the gold price rather than interest rates.

Of course, the point of $5,000 gold is not to reward gold investors. The point is to cause a generalized increase in the price level. A rise in the price of gold from $1,000 per ounce to $5,000 per ounce is really an 80% devaluation of the dollar when measured in the quantity of gold that one dollar can buy.

This 80% devaluation of the dollar against gold will cause all other dollar prices to rise also. Oil would be $400 per barrel, gas would be $10.00 per gallon at the pump and so on. There it is — massive inflation in 15 minutes: the time it takes to vote on the new policy.

Don’t think this is possible? It has happened in the U.S. twice in the past 80 years. You may even know some people who lived through both episodes.

The first time was in 1933 when President Franklin Roosevelt ordered an increase in the gold price from $20.67 per ounce to $35.00 per ounce, nearly a 75% rise in the dollar price of gold. He did this to break the deflation of the Great Depression, and it worked. The economy grew strongly from 1934-36.

The second time was in the 1970s when President Richard Nixon ended the conversion of dollars into gold by U.S. trading partners. Nixon did not want inflation, but he got it.

If gold went up five times, would oil rise by five times? 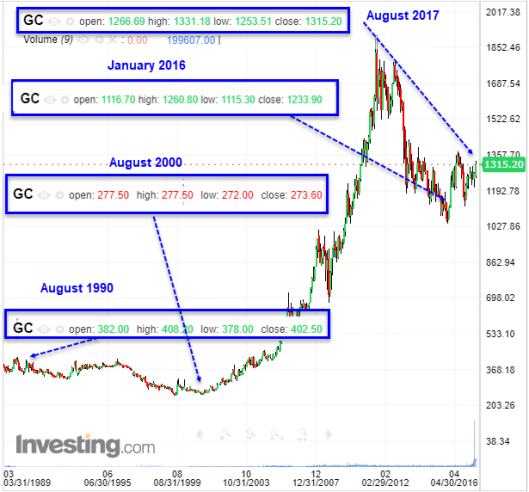 Thus, a rise in the price of gold of 500% does not mean oil will do the same.

However, the entire discussion is absurd because the Fed is highly unlikely to do what Rickards says. More importantly, even if the Fed did what Rickards said, the charts show the results may not be as hyped.

What Really Ended the Great Depression?

I’ve written before about the historical lie that President Franklin Roosevelt’s New Deal programs ended the Great Depression. After seven years of New Deal-era explosions in federal debt and spending, the U.S. economy was still flat on its back, and misery could be seen on the street corners. By 1940, unemployment still averaged 14.6 percent. That’s some recovery.

It is true that, as the war started, economic output surged, and unemployment fell. But periods of all-out war are very different than peacetime. Is it any surprise that unemployment fell dramatically when nearly 12 million Americans joined the military?

From 1942-45, America was not a free market economy; we were an all-out wartime economy – with the normal laws of economics suspended.

But a war is no way to fix an economy. Countering ISIS is not a jobs program. During World War II, when we built ships, tanks, aircraft, dropped bombs and sent our troops into harm’s way, we weren’t creating wealth.

A war is no more stimulating to an economy than a burglar stealing your money, the Japanese tsunami in 2011, Hurricane Katrina or a tornado that levels an entire town. Without such calamity, the resources spent reconstructing (or destroying, in the case of war) would be spent purchasing useful, life-enhancing products or investing in technology and capital equipment needed to boost economic output.

In the 1940s, government spending did, indeed, surge. The federal share of GDP rose from under 12 percent in 1941 to over 40 percent in 1943-45. In other words, almost half of everything that was produced in the nation was to fight the war. Domestic spending on many FDR New Deal programs in education, training and social services dropped more than 90 percent.

The real issue is what caused the economy to surge after the war was over.

This story also is not covered in the history books. Shortly after his third reelection in 1944, and at a time when the outcome of the war was no longer in question, FDR and his domestic advisers plotted a new New Deal with such spending items as national health insurance. The Keynesians were sure that the massive postwar drop in government spending would catastrophically tank the economy.

Paul Samuelson, the dean of neo-Keynesians at that time, warned in 1943 that, unless wartime spending and controls were extended, there would be “the greatest period of unemployment and industrial dislocation which any economy has ever faced.” Business Week magazine predicted unemployment would hit 14 percent with the postwar cuts.

Here’s what happened: Government spending collapsed, from 41 percent of GDP in 1945 to 24 percent in 1946, then to under 15 percent by 1947. And there was no “new” New Deal. This was by far the biggest cut in government spending in U.S. history. Tax rates were cut, and wartime price controls were lifted. There was a very short eight-month recession, but then the private economy surged.

The less the feds spent, the more people spent and invested. Keynesianism was turned on its head. Milton Friedman’s free-market advocacy was validated.

In 1946, the unemployment rate averaged below 4 percent and stayed that low for the better part of a decade. This all happened during the biggest reduction in government spending in U.S. history, under President Harry Truman.

What really ended the Great Depression was not the New Deal, not gold confiscation, not World War II.

Rickards said “end deflation” not end the depression, but even by that narrow measure, Rickards thesis is extremely questionable.

Returning to the Hype

With that history lesson out of the way, let’s return to the hype.

Jim Rickards
for The Daily Reckoning

P.S. For the past several months, my team and I have been vetting this very special gold opportunity on behalf of my readers…

It could potentially pay you back as much as 30 times your money over the long term, if not more.

To be clear: This deal won’t be for everyone. There are specific qualifications to invest in it, for example. If you DO qualify to get in on this deal, however…

I guarantee it’ll be one of the most exciting and potentially lucrative investments you could ever make.

The copy writers were clever enough to say “potentially lucrative” but the copy is still BS. No one can “guarantee” investment excitement.

There is no “New Case for Gold“. There is a case for gold that’s the same as it has always been.

Sure, there are as strong as reasons now as there have ever been: Bigger and bigger bubbles, negative interest rates, nearly unbelievable central bank balance sheets, and a banking system in Europe possibly on the verge of collapse.

These are not “new” themes, but they are new extremes in central bank absurdities.

To be fair, I like the title. The “case for gold” is not a best-selling title.

I share part of Rickards’ message. I advise people to buy and own gold.

I just do not see a need to make up stories about what the Fed might do or what the results may be.

When Does Gold Do Well?

Rather, gold performs well in specific instances, the primary one being a loss of faith that central banks have things under control.

Is everything under control? I think not and I believe Rickards would agree.

For further discussion, please see How Much Gold Should the Common Man Own?